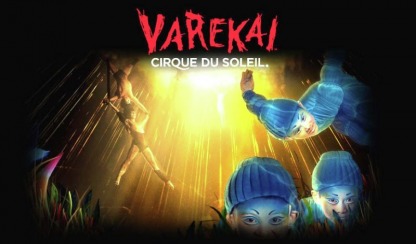 My greatest ambition as a kid was to be a clown in a circus. I grew up in England loving the touring circuses: Billy Smart’s, Chipperfiend’s, Bertram Mills. This was our excitement: the smell of the elephants and the camels, the danger of the high-wire acts, the water being splashed by the clowns over the audience, the central ring with sawdust thrown into the air by the galloping horses, it was all in the fun of a great experience.

Today circus is Cirque du Soliel, and for me, circuses have never been better. Gone are the animals smells but the high-wire acts have got higher and more dangerous, the clowns more colourful and brazen, and the shows have developed a theme, a story, a structure that hold audiences. Now it's not just entertainment, but theatre, spectacle, vibrant colour, costumes and pure magic, and great music. In Las Vegas there are seven Cirque experiences with twenty one shows touring the world. It’s a billion dollar business. Quite the rise from a couple of street clowns in Baie-Saint-Paul Quebec twenty five years ago.

Cirque du Soleil was built from imagination by a street clown named Guy Laliberti in the 1980's. Hard work, good business practices and a passion to be different drove the building of Cirque from small beginnings to the highly successful world entertainment organization that it is today. Here is a company where creativity not only thrives but is the guiding force behind all the artists who contribute to Cirque.

Cirque today is about partnerships and collaboration and it is in partnerships that we turn to in order to figure some of the most successful people. 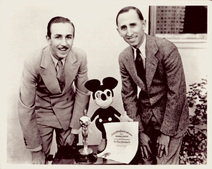 The Walt Disney Company would not be the great icon it is today without the financial management and leadership of Walt's brother, Roy Disney. From a young age both Roy and Walt decided to work together and to form a film company. When it first opened they called it The Disney Brothers, until later when a business decision convinced Roy that The Walt Disney Company would work better for marketing purposes. Walt's vision and creativity teemed with Roy's business savvy produced one of the most successful entertainment partnerships in the business. Walt made up ideas and Roy made every effort to make them happen. They would disagree so badly sometimes that they wouldn't speak to each other for months. But their relationship was build on total mutual respect where one wouldn't make a decision without the input of the other. 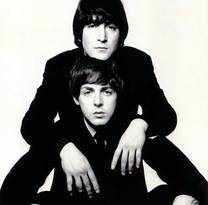 Fierce Rivalry, love and respect drove the innovative music of The Beatles. Through the partnership and song writing creativity of John Lennon and Paul McCartney their music changed the world. Generations grew up with a new soundtrack. This was a partnership so close that each wouldn't breath without the other. Each would bring an idea and a half completed song to the table and they would both work on each others song. At one time they were so intertwined that they made a deal that no song would be published without the Lennon McCartney label on it. Of course the third partner who arranged many of their hits was Producer George Martin. As the success of the Beatles grew, the two song writers worked more on their own, which fired up a song writing rivalry that spurred each other on. Each tried to better the other. Their music became more innovative, creative, melodic and popular to an audience that was now world wide. People love new things and the Beatles were ahead of the game when it came to melodic innovation. Their list of hit singles is now legendary, while many of their album cuts have become classics. 290 songs is one of the estimated totals of their creative output together. They just kept getting better and better until one day they split the partnership and went their own ways. The Beatles had run their course and won.

Mr. Charles Rolls and Mr. Henry Royce met at a luncheon on May 4th, 1904. Rolls was the owner of one of the first car dealership and Royce was an engineer. Together they decided to create the "Best car in the world." It was a businessman/innovator relationship (much like the Disney Brothers) where Charles Rolls contracted to sell every car that Henry Rolls could manufacture. 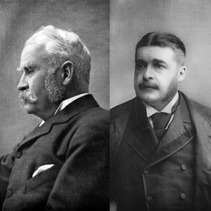 As their relationship grew and they became more and more successful in Victorian England, their dislike for each other kept them apart. Gilbert would write the stories and the words, then he would send them over to Sullivan who wrote the incidental music and the songs. Gilbert would direct the productions and together they reaped the benefit of success. With each musical comedy they surpassed the previous and they were the rock stars of their era. Both W.S. Gilbert and Arthur Sullivan were good in their own right but they were very successful as partners, so they learned to live with it. They just didn't have to see each other. And they didn't. Except on the odd occasion when they had to work out a problem. Their working relationship was kept together by theatrical owner Richard D'Oyly Carte, who was masterful at staging successful Gilbert and Sullivan production's. His company would go on to promoted G & S works for over a century and today G&S operettas are performed by local Gilbert and Sullivan societies around the world.

Both Gilbert and Sullivan knew that they had found an exceptional partner in each other, but like many other artists who bluster with large personalities and ego conflicts each knew how to separate the art from the artist. They each valued their partnership greatly. 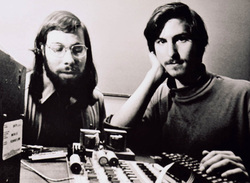 Steve Wozniak and Steve Jobs co-founded Apple Computer, Inc. in 1976. Wozniak was the tech genius while Jobs, a tech guy himself, became the businessman and salesman. Each saw the potential of the other and together, they developed and nurtured ideas in Steve Jobs home garage, that would change the world. First inventing the Apple 1 and 2, then producing the MAC computer. They both stayed with apple until the mid 1980s when Jobs was fired by the board and Wozniak left the company to pursue other ideas. Jobs was later called back to Apple where he built the company's fortunes through innovative electronic devices such as the ipod, iphone and ipad. Wozniak turned to teaching, philanthropy and other inventions. In 2011 Apple Inc. became the wealthiest company in the world and today their legacy lives on from the creation of an innovative and forward thinking business, started in a garage.

Please Note: Articles and writings contained on this site are the property of Brian R. R. Hebb (unless otherwise stated) and may not be reproduced, copied, edited, published, transmitted or uploaded in any way without the express written permission from Brian R. R. Hebb. For information of use and possible permission, please contact the author directly. www.brianhebb.com